Location:  35 Minutes east of Sherwood Park on Hwy 16 located on the Southside of the town of Mundare. 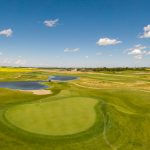 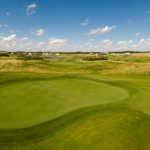 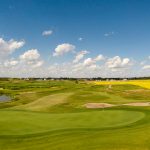 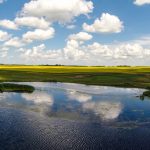 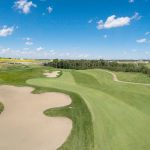 Saturday & Sunday including holidays:  $82 plus GST

Whitetail Crossing Golf Club is a Championship 18-Hole golf facility located only 35 minutes east of Sherwood Park on the Yellowhead Highway. The par 72 Puddicombe designed course incorporates native area’s existing ridges, wetlands and natural features. Over half the holes have either water or naturalized wetlands, three holes are cut out of the existing bush and the remaining five holes share a links style and play with an abundance of sand and native grass planting. The 7,100 yard prestigiously manicured course continues to receive rave reviews and is known to have the best greens in the area.

Practice Facility:  The key to refining your golf game is through practice, the Practice Facility at Whitetail Crossing offers a massive grass teeing area with multiple target greens. This full-length facility is sheltered from the west winds by a natural ridge of existing trees. To complement the practice facility, you will find a large putting green across from the clubhouse that is of the same high caliber 4quality as you will find on the rest of the golf course.

Tournaments:  Whitetail Crossing specializes in customer service and outstanding playing conditions, and place a high importance on well organized events. With space for 15 to 150 people, Whitetail can cater to all types of events. Booking your tournament at Whitetail Crossing creates a “5 Star” atmosphere with strict attention to the finer details, making your guests’ day a memorable one.

Rural doesn’t mean rough. Nor does it mean pricey.

That’s the word coming from Laurent Leblanc, General Manager at the Whitetail Crossing Golf Course in Mundare, where he noted his track has become more user-friendly and also more consumer cost-conscious with some great weekday deals.

“I don’t play it as much as some of the guys out here, but they’re saying the greens are absolutely outstanding right now. We had no winter kill and no frost damage, anything like that,” like so many greater-Edmonton area courses did this year and last. “That’s our saving grace. The greens are awesome and we fixed a bunch of drainage issues on the course. That’s had miraculous results this year. I wouldn’t say they’re perfect (yet) but they are a major improvement over what we’ve had the last few years.”

Now entering the 12th year of play on the front nine holes, and the 10th on the homeward stretch, Whitetail Crossing is a links style of layout which can cause issues for some golfers, especially those that tend to miss the fairway with tee volleys or long approaches into greens. Where that long, tangly fescue grasses used to take no mercy on anyone, it’s now softened its stance a bit, as it has been tamed down a bit to allow for some leniency.

“The long and short of it is we are trying to make our course a little more player-friendly,” said Leblanc to that issue. “We mowed all our fescue down and it’s just coming in right now, playing at about six inches long. It’s just beautiful as we got rid of all the tufts in there. It’s actually a lot more player-friendly. At a max, we’re going to keep it at eight to 10 inches so it’s not so punishing. When your ball goes in there, you can find it.”

Add to that a wider secondary rough that slows a ball down as it trundles toward the really long grass and fewer wayward shots are ending up in that golfing purgatory. Yes, the fescue is still there, and yes, it can cost you a stroke or two if you get into it, but now you at least have a fair chance of getting out of jail without paying too steep a price.

Add to that the cleaning out of fescue in certain spots on-course and Whitetail, a fun play even with the deep rough, becomes even more fun and manageable for the average golfer.

“Some of the landing areas where we had fescue just beyond bunkers, which would kind of trap people going over the bunkers because they wouldn’t see it, we’ve mowed that down and made those playable areas also. It’s like the first cut of rough instead of deep fescue,” Leblanc explained of that change. “We want people to enjoy their game out here. It’s by no means easy but if they’re playing the right tees, it’s fair. We widened the fairways a bit; the tough ones are a bit wider.”

As to the overall design, Leblanc notes, “Water comes into play on the front, six, seven times. On the back, three or four. It’s a nice combination of links, trees and water. You see it all out here, for sure.”

What you also see on your way to Whitetail Crossing is some of the countryside. Located in Mundane, which to many people seems a long distance to go for a round of golf, it’s anything but. From St. Albert, with the Henday now in operation, it’s about 45 minutes. From Sherwood Park, it’s even closer, so there’s no reason not to hit the Yellowhead Highway East and take the short drive because you’ll find it’s well worth your time.

“That thought that we’re far away is definitely our biggest enemy,” Leblanc agreed. “But our pricing makes up for that.”

To book a tee time at Whitetail Crossing GC, go to playgolfalberta.com and follow the links.