From Edmonton (Hwy 16A / Yellowhead)

Take Exit 779 and proceed south. This road will become 48th street. Proceed down 48th street and turn left at 49th avenue. Turn right at Golf Course Rd. and the left on Fairway Drive where the entrance to the golf course will be located immediately on the left. 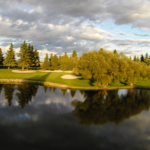 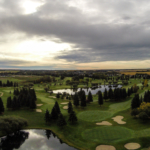 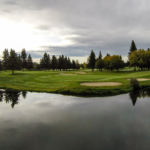 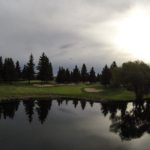 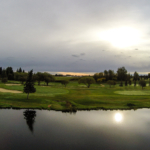 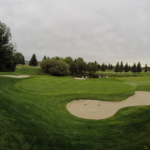 Saturday & Sunday including holidays:  $88 plus GST

Owned and operated by the Town of Stony Plain, the course operates under the umbrella of Community Services. Many individuals within the town structure aid in supporting the course and its associated functions and a true team spirit is what makes the course successful.

The commitment by the Town of Stony Plain to always strive to improve, has the course sought by regional and national events. The facility has hosted over 15 major events including regional, provincial and national championships.

Located just minutes west of Edmonton, we would be pleased to host your next tournament, banquet, wedding reception or company function! Afterwards take time to walk along Main street or view the many murals depicting the history of the town in various locations. Our friendly community will make your time an enjoyable whatever your activities may be.

2018 Tournaments:  Stony Plain Golf Course is the perfect venue for your 2018 company event. With seating up to 150 people, two patio decks and immaculate course conditions, we know we will continue to exceed expectations.

In a way, it was just like Christmas in May at the Stony Plain Golf Course. You see, for the first time in a long, long time the tee sheet was full. And each and every golfer got to ‘unwrap’ a present of sorts 18 times, as they putted on the course’s brand-new greens.

Three years ago, Stony Plain GC’s putting surfaces suffered some major chemical damage. Then, for two winters in a row, ice damage further comprised the ability of the grass to grow necessitating some major, and drastic steps on behalf of the Town of Stony Plain, the course owner.

Speaking to those issues, Executive Professional Jeff Cuthbertson noted, “We had a ton of damage. The conditions were terrible and the greens just didn’t survive. So we started a renovation project (in late 2018) where we removed all the putting surfaces, reshaped (the greens) and amended all our soil, changed the drainage and then put down brand new sod. They’re all brand new shapes, brand new sizes.”

When the greens’ damages at the course continued to develop over the past three seasons, many regulars went elsewhere to find better playing conditions. While that was understood by the management team at the Stony course, they are now eager to see those folks return ‘home’ as things are returning to normal. For years, Stony Plain was known for their fast-running, undulating greens and that’s something everyone can once again expect at this course, said Cuthbertson.

“For them to get back on new greens, on a course that’s fun to play, enjoyable to play, it is exciting. It’s great to see everybody coming back!”

In all, approximately 130,000 square-feet of T1 Bentgrass was laid down at Stony. That included the 18 regulation greens plus the putting green, which had been used as a patch-up tool at a time when it was thought some of the original greens could be saved. All the work on the newly sodded greens was done in-house by superintendent Bill Gregoire and staff. “They did it quickly. They did it efficiently and the course has turned out great!” the pro stated.

One unforseen issue that arose was finding enough turf to cover the bare putting surfaces because so many other courses across Alberta were also seeking replacement grass given the extreme winter weather of the past few years, Cuthbertson pointed out.

“We got lucky. We had nine greens that we’d booked, so we had 80,000 square-feet of turf available to us,” prior to other courses seeking the same thing from the same vendors. “The other 60,000 (square-feet) we had to go out and find, and it was tough. There was a lot of winter damage this year and it just wasn’t Edmonton either. It was province wide. We ended up finding sod out of Ontario. The stuff in Western Canada was gone. Sold out.”

As to being on these new greens, they’ll to be somewhat slower than many may be expected, at least to begin with, said the pro. But be assured, as time passes they’ll get back to where they were and re-establish Stony Plain’s reputation of having the best putting surfaces in the Edmonton area.

“It’s going to take a bit of time. We’re lowering the height every day. We’ll have a lot  more top-dressing done and we’ll roll every day,” so even though the greens here may be a bit slower than people are used to, they won’t be far off the speeds most public golf courses run at each and every day.

“It won’t necessarily be Stony Plain fast, but I think we will get back there,” ended Cuthbertson.

And that’s good news, not only for this course that has gone through such difficult times over the past three years but also for all those who knew, and loved, the challenges the greens on this track presented each and every time.

For booking an online tee time at the Stony Plain Golf Course, go to www.playgolfalberta.com.