Bryson DeChambeau’s pre-tournament strategy to go full bore and hit the golf ball as far as he could to conquer the West Course at Winged Foot Golf Club and win the U.S. Open was met with doubts and even a few laughs.

The blueprint to win the national championship, after all, is to avoid penalizing rough and survive by hitting narrow fairways and firm greens, especially at punishing Winged Foot.

It was on the West Course where the 2006 U.S. Open champion Geoff Ogilvy won at 5 over and the 1974 U.S. Open winner Hale Irwin won at 7 over, with that tournament later being dubbed The Massacre at Winged Foot. No one, the general consensus holds, can win by throwing caution to the wind and playing out of the nasty rough that is the U.S. Open’s trademark.

But the long-hitting mad scientist with Popeye arms and big shoulders who sports a tam o’shanter cap silenced naysayers and critics by bombing and gouging his way to winning the U.S. Open on Sunday in Mamaroneck, New York.

With a final-round, 3-under-par 67 – he was the only player to break par in the last round – DeChambeau outmuscled bruising Winged Foot and toppled Matthew Wolff by six shots. DeChambeau had but one blemish on his card – a bogey on the eighth – and took control of the tournament with an eagle from 38 feet on the par-5 ninth (which he reached in two with a wedge) and a birdie from 13 feet on the 11th. He also got through the rugged first five holes – which claimed plenty of victims throughout the week – with four pars and a birdie at the fourth. 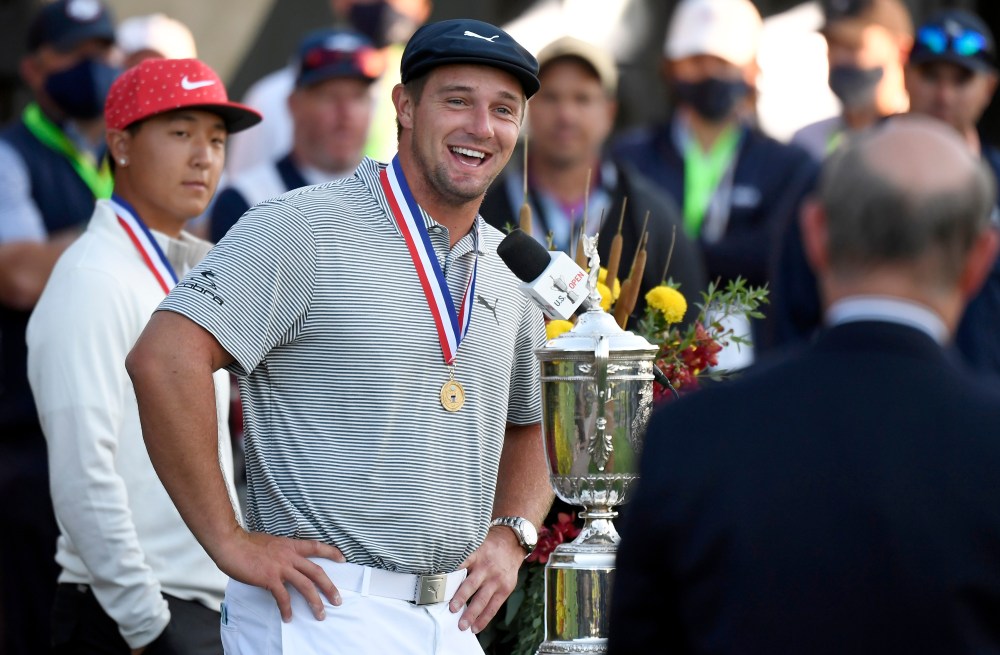 DeChambeau reckoned correctly that his speed and strength would save him in the thick rough, and his other talents, including stellar touch on and around the greens, would make a difference. His grit and work ethic didn’t hurt, either.

“As difficult as this golf course was presented, I played it beautifully,” DeChambeau said. “Even through the rough, I was still able to manage my game and hit it to correct sides of the greens and kept plugging away. My putting was immaculate today. My speed control, incredible. That’s why we worked so hard on my speed control. You see me out there on the greens with the device trying to control my speed. 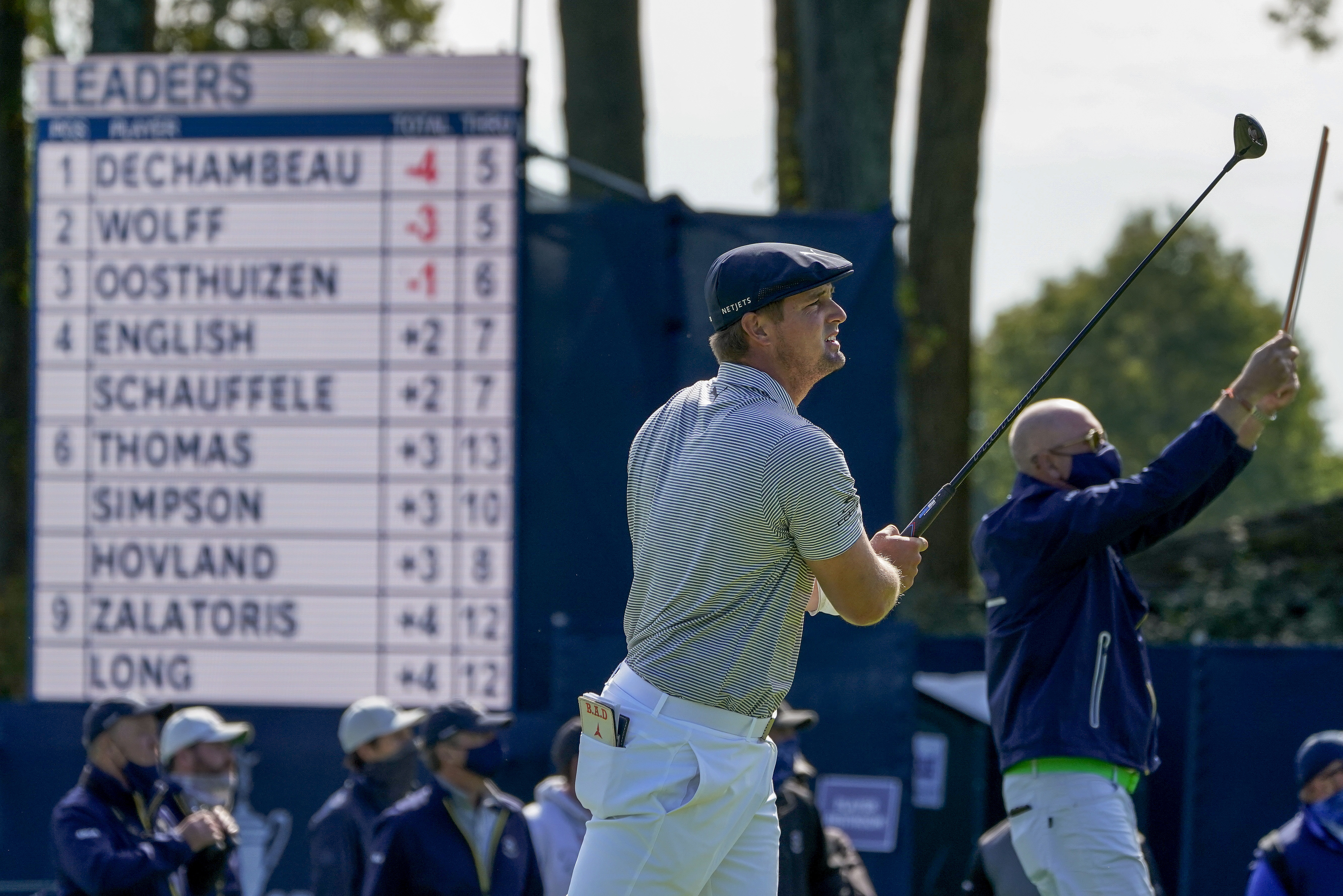 Bryson DeChambeau plays his shot from the sixth tee during the final round of the US Open Golf Championship, Sunday, Sept. 20, 2020, in Mamaroneck, N.Y. (AP Photo/Charles Krupa)

“So many times I relied on science, and it worked every single time.”
With his first major triumph, DeChambeau, who turned 27 on Wednesday, joined Jack Nicklaus and Tiger Woods as the only players to win a U.S. Amateur, the NCAA Individual Championship and a U.S. Open.

“My goal in playing golf and playing this game is to try and figure it out,” DeChambeau said. “I’m just trying to figure out this very complex, multivariable game, and multidimensional game as well. It’s very, very difficult. It’s a fun journey for me.

“For me, it’s about the journey of can I execute every shot more repeatably than everybody else? I was able to do that this week. That’s why I won by six.”

Wolff closed with a 75 to finish at even-par 280. Louis Oosthuizen (73) finished in solo third at 2 over. At 3 over was Harris English (73), who lost a ball in the rough on the first hole and suffered a two-stroke penalty. Xander Schauffele (74) finished fifth at 4 over.

“It’s a game that we’ve really never seen before,” English said of DeChambeau. “I guess John Daly changed it a little bit during his time, Tiger changed it, and I think Bryson is now changing it again.

“Hitting the ball in the rough out here and trying to get it on the green is really hard, and it’s really impressive what he’s doing.”

Rory McIlroy, who finished in a tie for eighth, wondered of DeChambeau’s methods would work in a major. He doesn’t have any doubts anymore.

“I sort of said, okay, wait until he gets to a proper golf course, he’ll have to rein it back in,” McIlroy said. “This is as proper as they come and look what’s happened. He’s got full belief in what he’s doing, and it’s pretty impressive.”

It was nearly a year ago when DeChambeau, who now has seven PGA Tour titles on his resume, decided to become Paul Bunyan and began packing on weight and beefing up in the weight room. In transforming his body, he attacked five meals a day, drank 6 to 7 protein shakes per day, consumed about 5,500 calories per day and hit the weight room three times for intense workouts every 24 hours.

The result? He added 40 pounds of mass to an already large frame and added serious numbers to his swing and ball speed. 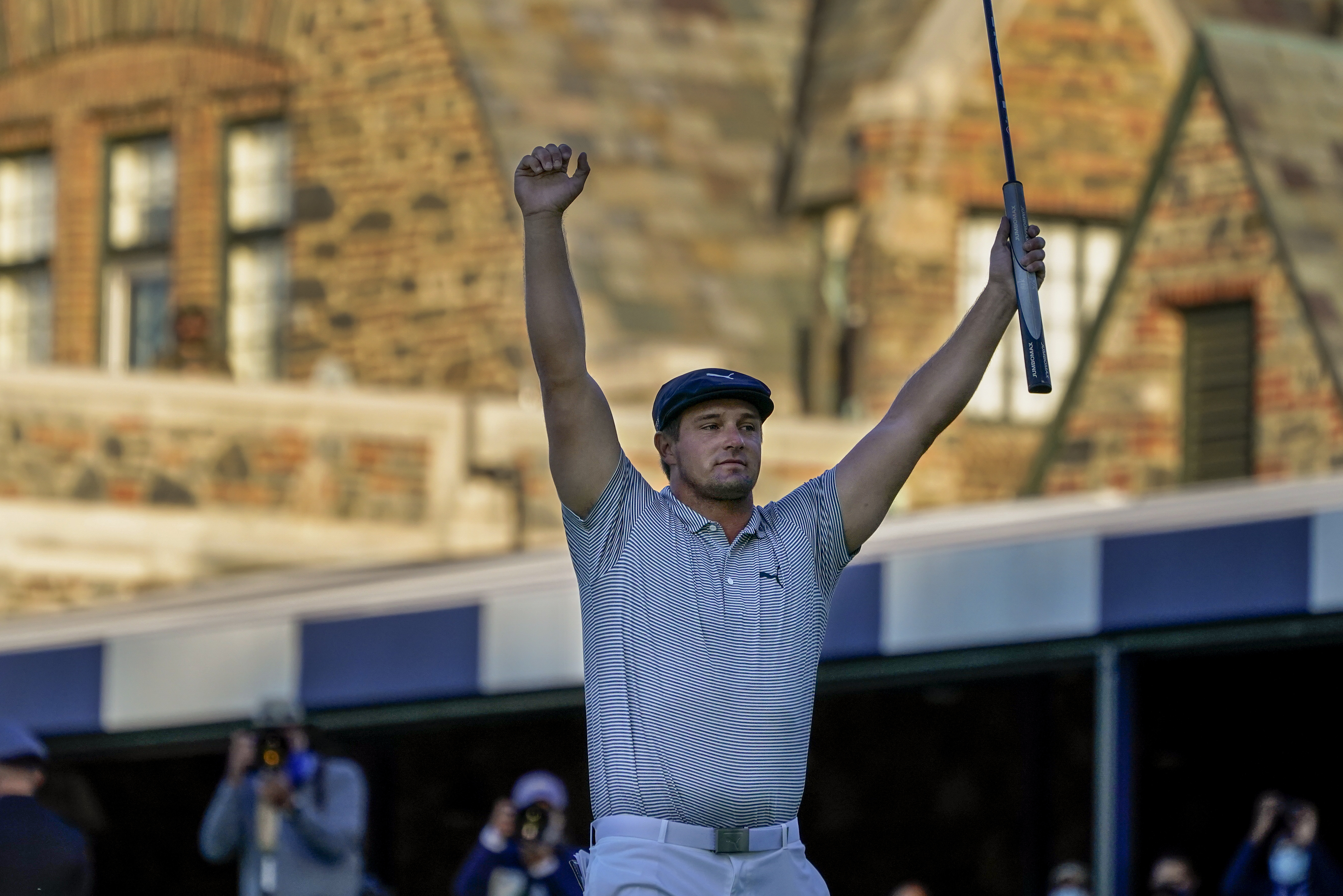 When golf returned from a 13-week break due to COVID-19, DeChambeau had a new body and a new swing and became the talk of the game as he turned courses into putt-putts with eye-opening drives – he’s averaging 325 yards with his drives and 195 yards with an 8-iron – and posted four top-8s in four starts, including a win at the Rocket Mortgage Classic. Then he earned his first top-10 in a major at last month’s PGA Championship, where he proved his power game could play well in major championship conditions with his tie for fourth.

Still, there were critics to what some called his madness. DeChambeau just kept working – and eating and playing.

He gained the 54-hole led with a 65 in the third round – tied for the lowest score of the week – despite hitting just two fairways in the third round and 12 in the first three rounds. Still, he led by two with 18 to play following a plan of attack similar to DeChambeau’s – hit it far and then go hit it again from wherever it is.

But Wolff and his unorthodox swing featuring a hip shimmy trigger couldn’t hang with DeChambeau in the final round. His lone highlight came on the ninth where he hit driver, wedge to 10 feet and canned the putt for eagle.
Wolff hit seven fairways and made five bogeys and one double bogey. Wolff tied for fourth in the PGA Championship last month in his only other start in a major.

“A bunch of positives,” Wolff said. “You can’t take Bryson out because obviously he won; shooting even par (or better) for four rounds at Winged Foot is pretty exceptional. I played really tough all week. I battled hard. Things just didn’t go my way. But first U.S. Open, second place is something to be proud of and hold your head up high for. It’s definitely not the last time that I’m going to be in this spot.”

In the end, DeChambeau was the only player to get the better of Winged Foot. The West Course’s standing as one of the toughest courses on the planet came into question on a calm Thursday as 21 players broke par in the first round.

But Winged Foot kicked back with authority with the help of cooler temperatures, puzzling winds and tougher pin placements. In the final three rounds, only 14 players managed to break 70. Jason Day, who finished 14 over, said the toughest stretch on the course was “walking to the first tee. You have to play the 18 holes.”

Well, DeChambeau made the walk four times and played 72 holes his way.
And made it work.